Our Timor-Leste coffee is a diamond in the rough.  An excellent cup of coffee from the Indonesian Islands. Nice robust but balanced cup and one of the lowest acid coffees in the world. 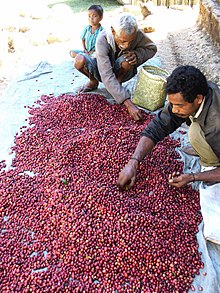 Considered one of its primary industries, the coffee industry of Timor Leste (East Timor) is its chief export commodity. Many different groups have from the early sixteenth century to the eighteenth century, competed for political control of Timor Leste, including indigenous groups, the Dutch and the Portuguese (Curnow, R. 2003). 1749 saw the division of Western Timor and Eastern Timor, where the Dutch occupied the West and the Portuguese occupied the East right up until to the cessation of the colonial era. Accounting for $26.4M of Timor Leste’s total exports in 2017, or 24% of its $108M total exports ("OEC - Timor-Leste (TLS) Exports, Imports, and Trade Partners", 2019), the Portuguese’s introduction of coffee production and cultivation to Timor Leste in the early nineteenth century has progressed the nations growth and development.

For the majority of those who live in Timor Leste, their lifestyle has greatly depended upon the maintenance and prosperity of the agriculture sector. To most who reside in Timor Leste, coffee production remains a source of supplementary income, with estimates from 2003 noting around 200,000 people (Curnow, R. 2003) rely on coffee production and cultivation as their primary source of income. Timor Leste’s coffee production is done in a multitude of different areas including the districts of Manufahi, Ainaro and Liquica who produce a large amount, along with the districts of Aileu and Bobonaro. However, production of Timor Leste’s coffee is particularly concentrated in the district of Ermera, where according to World Bank estimates, almost ½ of the nation’s coffee is produced (World Bank, 2001)

What remains poignant in the coffee industry of Timor Leste is that “coffee production in East Timor is based on relatively unmanaged plantations, with bean- gathering and processing by villagers, and scant attention paid to cleaning/weeding, pruning, pest and disease management or planting of new trees,” according to the Timor Leste Ministry of Agriculture and Fisheries. (Ministry of Agriculture and Fisheries, 2009).

Coffee production in Timor Leste is considered to be a process where there is a limited effort to tend to coffee bushes, whereby an emphasis is placed on land clearing around bushes to make way for future harvest. Through kin and hired help, producers supplement their work during the harvest time to maximise the efficiency of production. Of the coffee producing families, the average size has 6 members, where it is approximated that their earnings are between $127 and $200 per year (World Bank, 2001). Often extra labour is used, most of which include extended family or a seasonal workforce, whereby their payment is usually PIK or bartar. (Atkinson, 2002).Many producers harvesting coffee in Timor Leste state they don’t own the lands, rather they use “lands abandoned by former estates”. Whilst by the definition of Timorese law means this defaults to the state, it is often turned a blind eye to because of the economic contribution of production. (DAI, 2001).

Loans and grants from international agencies such as the ADB and World Bank have also assisted in expanding production within the region. In December 2016, the ADB approved a $225,000 grant to help reduce poverty in Timor-Leste by funding long-term improvements in the volume and quality of coffee produced by smallholder farmers.“Coffee is grown by almost one-third of all Timorese households and has been the country’s largest non-oil export for the past 150 years,” said David Freedman, Country Economist from ADB’s Timor-Leste Resident Mission. Moreover, these grants by global agencies enable coffee producers to reinvest in critical production infrastructure and create an industry of self-sufficiency, seasonal employment, stable income and long-term economic growth.

Timor Leste’s coffee production accounts for under 0.2% of the global coffee trade, however it remains in a unique and extremely opportunistic position given its standing as the largest single source coffee producer globally. The National Co-operative Business Association describe the emerging coffee as “one of the finest and most unique coffees in the world” (Curnow, R. 2003). This is largely a result of the fertile volcanic soils known as the ‘Hibrido de Timor’, where the coffee is grown. Additionally, Alf Kramer, a leading coffee expert has described Timor’s coffee as “among the top 1% in quality and price worldwide” (Curnow, R. 2003).

Very little of the globes coffee is grown wild at higher attitudes of a tropical island, making the coffee method unusual and unorthodox, and with limited attention and intervention paid to the plantations, the coffee is best described as chemical free.

The Hibrido de Timor, the Timorese hybrid coffee variant is the result of an unstructured cross between Coffea arabica (arabica coffee) and C. canephora (robusta coffee).This variant brings across the qualities of the two cultivated types of coffee, including the ability to grow in far less fertile soil. In doing so, the blend loses an amount of cup quality from the better regarded and less strong type. Furthermore creating a unique blend that can remain amongst the harsher conditions of Timor, and yet retain properties of coffee quality “among the best in the world”. (Kramer, 2001)

Timorese coffee producers maintain their usage of processing coffee from cherry on the bush to parchment. According to DAI statistics in 2002, 75% of coffee was processed in Timor Leste using this method, where only hours after being picked, the cherry begins to deteriorate, compared to properly stored parchment which remains a far slower deterioration process.