Kona coffee is the market name for coffee (Coffea arabica) cultivated on the slopes of Hualalai and Mauna Loa in the North and South Kona Districts of the Big Island of Hawaii. It is one of the most expensive coffees in the world. Only coffee from the Kona Districts can be described as "Kona." The weather of sunny mornings, cloud or rain in the afternoon, little wind, and mild nights combined with porous, mineral-rich volcanic soil create favorable coffee growing conditions. The loanword for coffee in the Hawaiian language is kope,pronounced [ˈkope].

Samuel Ruggles brought coffee to the Kona District in 1828

The coffee plant was brought to the Kona district in 1828 by Samuel Reverend Ruggles from Brazilian cuttings. English merchant Henry Nicholas Greenwell moved to the area and established Kona coffee as a recognized brand later in the 19th century. The former Greenwell Store and Kona Coffee Living History Farm have since become museums.

In other parts of the Hawaiian islands, it was grown on large plantations, but the 1899 world coffee market crash caused plantation owners to lease land to their workers. Most were from Japan, brought to work on sugarcane plantations. They worked their leased parcels of between 5 and 12 acres (49,000 m2) as family concerns, producing large, quality crops.

The tradition of family farms continued throughout Kona. The Japanese-origin families have been joined by Filipinos, mainland Americans, and Europeans. There are approximately 800 Kona coffee farms, with an average size of less than 5 acres (20,000 m2). In 1997 the total Kona coffee area was 2,290 acres (9 km2) and green coffee production just over two million pounds.

Kona coffee blooms in February and March. Small white flowers known as "Kona snow" cover the tree. Green berries appear in April. By late August, red fruit, called "cherry" because of resemblance to a cherry, start to ripen for picking. Each tree, hand-picked several times between August and January, provides around 15 pounds of cherry, which result in about two pounds of roasted coffee.

Within 24 hours of picking, the cherry is run through a pulper. The beans are separated from the pulp and then placed overnight in a fermentation tank. The fermentation time is about 12 hours at low elevation or 24 at higher elevation. The beans are rinsed and spread to dry on a hoshidana or drying rack. Traditional hoshidanas have a rolling roof to cover the beans in rain. It takes seven to 14 days to dry beans to an optimal moisture level of between 10 and 13% (by Hawaii Department of Agriculture regulations: 9.0-12.0%). Too much moisture content in coffee allows the growth of ochratoxin A, a harmful mycotoxin, hazardous to human health.  From here, the beans are stored as "pergamino" or parchment. The parchment is milled off the green bean prior to roasting or wholesale. 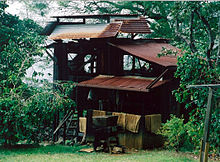 Kona coffee beans are classified by law according to seed. Type I beans consist of two beans per cherry, flat on one side, oval on the other. Type II beans consist of one round bean per cherry, otherwise known as peaberries. Further grading of these two types of beans depends on size, moisture content, and purity of bean type. The grades of type I Kona coffee are 'Kona Extra Fancy', 'Kona Fancy', 'Kona Number 1', 'Kona Select', and 'Kona Prime'. The grades of type II Kona coffee are 'Peaberry Number 1' and 'Peaberry Prime'. Also, a lower grade of coffee, called 'Number 3' (or 'Triple X') can not legally be labeled as "Kona" but as 'Hawaiian' coffee. Any bean grade below Number 3 is considered 'Offgrade' coffee and can only be labeled as generic coffee. Not an official classification grade, but commonly used by Kona coffee farmers, is the 'Estate' grade where the various grades are not being separated from each other. Only the 'Number 3' and 'Offgrade' beans are being sorted out.

Infestations of the root-knot nematode damaged many trees in the Kona districts in the 1990s. Symptoms are single or clusters of trees with stunted growth, especially when transplanted. In 2001 rootstock from the Coffea liberica species was found to be resistant to the nematodes. It could be grafted with Coffea arabica 'Guatemala' variety to produce a plant that naturally resists the pest, still producing a quality coffee product. The combination was named after Edward T. Fukunaga (1910–1984), who was superintendent of the University of Hawaii's Kona Research Station in Kainaliuin the 1950s through the 1970's

I love this coffee. It is smooth and nutty with a lil' hint of chocolate. Blessed Bean is one of the few places where I can confidently buy Kona and certified Jamaican Blue Mountain coffee. They have many other varieties and expert knowledge to help you with your purchase as well. Their products are well packed and shipped quickly. I am a multiple repeat customer and will keep coming back. Excellent service, excellent coffee.

If you have to ask then you probably should work your way into this. Considered to be one of the best beans in the world. It is definitely expensive but well worth it

Back to Single Origin