We are extremely pleased to be able to offer this exceptional Peaberry coffee from the Kiplal Estate in Kenya.. Remember a Peaberry coffee makes up less than 5 % of the harvest and is hand sorted from the dried coffee beans before bagging.

Peaberry, known in Spanish as caracolillo, is a type of coffee bean. Normally the fruit ("cherry") of the coffee plant contains two seeds ("beans") that develop with flattened facing sides, but sometimes only one of the two seeds is fertilized, and the single seed develops with nothing to flatten it. This oval (or pea-shaped) bean is known as peaberry. Typically around 5% of all coffee beans harvested have experienced this peculiarity.

Peaberry coffees are particularly associated with Tanzanian Coffee, although the peaberry variety of Kona coffee has also become quite prominent.

Peaberry beans are widely reputed to roast better than flat berries, being said to roast more evenly, because their rounder shape minimizes sharp edges and allows the berries to roll about the roasting chamber more easily, as well as because the alleged higher bean density may improve heat transfer in the roasting process. Peaberry coffee tastes different from the coffee from normal beans from the same crop. However, some sources claim that the major difference of peaberry beans is that they have been carefully sorted, which impacts the flavor profile of the coffee.

The coffee industry of Kenya is noted for its cooperative system of production, processing, milling, marketing, and auction system. About 70% of Kenyan coffee is produced by small- scale holders. It was estimated in 2012 that there were about 150,000 coffee farmers in Kenya and other estimates are that six million Kenyans were employed directly or indirectly in the coffee industry. The major coffee-growing regions in Kenya are the high plateaus around Mt. Kenya, the Aberdare Range, Kisii, Nyanza, Bungoma, Nakuru, Kericho and to a smaller scale in Machakos and Taita hills in Eastern and coast provinces respectively. .

The acidic soil in highlands of central Kenya, just the right amount of sunlight and rainfall provide excellent conditions for growing coffee plants. Coffee from Kenya is of the 'Colombia mild' type, and is well known for its intense flavor, full body, and pleasant aroma with notes of cocoa and high grade coffee from Kenya is one of the most sought-after coffees in the world. However, due to a property boom in areas that grew coffee and price instability, production in this African Great Lakes country fell from about 130,000 metric tons in 1987/8 to 40,000 tons in 2011/12. 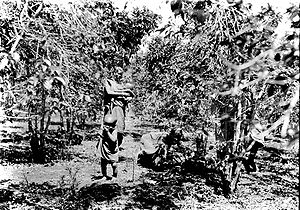 A coffee plantations in Kenya in 1936.

Despite its proximity to Ethiopia (widely believed to be the region from which coffee originated), one source states that coffee was not cultivated in Kenya until 1893, when French Holy Ghost Fathers introduced coffee trees from Reunion Island. The mission farms near Nairobi, the capital city of Kenya, were used as the nucleus around which Kenyan coffee growing developed. Overview of the Kenyan coffee industry Another reference claims the British introduced coffee growing into Kenya about 1900.

While it may be widely known as a type of Kenya coffee, Kenya AA is actually a classification of coffee grown in Kenya. All Kenyan coffee is graded after it is milled. Grades are assigned based on the screen size of the bean. Beans with a screen size of 17 or 18 (17/64 or 18/64 of an inch) are assigned the grade AA, generally the largest bean. While the large bean size is considered by many to be a sign of quality, it is important to note that it is only one of many factors in determining high quality coffee.

Kenya Coffee is traded once a week at the Nairobi Coffee Exchange. It is based at The Wakulima House, Exchange Lane which is off Haile Selassie Avenue.

The coffee is packed in single sisal bags of 60 kg, but the bids are made per 50 kg bag.

Below is a sample of average prices of coffee (per 50 kg bag) at the auction.